Does Carry In, Carry Out Work?

The Portsmouth Herald reported today on the problem of litter at area beaches, citing data from nhmarinedebris.org on the top 5 debris types collected at our Jenness Beach cleanups in Rye, NH (cigarette butts, bottle caps, rope, plastic bags, and straws). Surprisingly, at a cleanup last week, a syringe was found, something relatively unusually for that beach, but very dangerous considering the huge numbers of beachgoers expected this holiday weekend.

In the article, businesses across the street lamented the lack of trash bins at the beach - a product of the "Carry In, Carry Out" policy at state beaches - saying that people will often walk across the street to the beach businesses to ask them to dispose of their trash.  One, Tyler McGill of Summer Sessions Surf Shop said, "The idea of 'carry-in, carry-out' is a great in concept," McGill said. "The reality is people aren't going to."

We worked with Dr. Jenna Jambeck at the University of New Hampshire on a survey about attitudes toward marine debris in 2006-2007. We asked about the state's Carry In, Carry Out policy, and of 472 respondents, 54% said "I think garbage cans should be provided, and I would use them," while 35% said, "It doesn't make a difference to me, I just bring my trash home."  Fifty-three percent of respondents also said that having trash bins would be most effective at deterring litter at the beach.

But trash bins, and monitoring them, cost money - and may also attract pests.  Amy Bassett, public information officer for NH State Parks, was quoted saying, "I think (carry-in, carry-out) is a program that's successful in a lot of places...I do think it adds to your experience of the natural setting. It puts that responsibility on us, meaning me as a user." 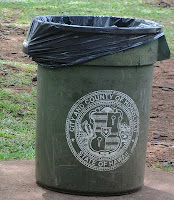 I have mixed feelings on the issue. I agree we should all be responsible for our trash. But beaches in many places provide trash bins as an amenity, and it's definitely convenient. I visited beaches in Florida and Hawai'i over the winter and saw trash cans, but no wildlife or birds around them. And I'll admit, there was still some litter on the beach, despite the trash bins.

What do you think - does Carry In, Carry Out work? What is needed to keep our beaches litter-free?
Posted by Jen Kennedy, Blue Ocean Society Exec. Director at 8:07 AM