Marine Debris- It is everywhere...

Part of Blue Ocean Society's work includes identifying and removing derelict fishing gear (DFG) or marine debris both in the ocean and on the coast. One of the current projects involves going around the 9 Isles of Shoals in the Gulf of Maine and using sonar and fishermen reports to locate areas of debris and DFG. In addition we are also attempting to do coastal clean-ups on each of the Islands.  This past Sunday, Mother's Day, Dianna Schulte (BOS Research Coordinator) and myself set foot upon Appledore Island, the home of UNH/Cornell's Shoals Marine Lab (SML), to get the Marine Debris, DFG party started.  This was a scouting mission to see what exactly we were dealing with in terms of accessibility, terrain and need.  Hal Weeks, Assistant Director of SML met us at the dock and we were treated to a very nice lunch before we began our trek around the island. 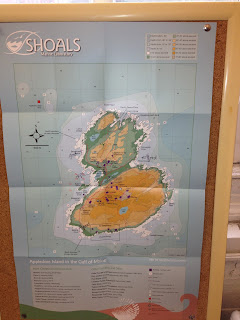 Appledore is the largest of the 9 Islands of the Isles of Shoals archipelago.  Since it is home to the Marine Lab it is also a green and sustainable campus meaning that the lab community is self- sufficient. Electricity is generated using a combination of wind, solar and diesel generated power, composting bathroom facilities and strict water conservation and composting and recycling systems. The island itself is considered to be in " near-pristine" condition and every effort is made to keep it as such.  Appledore is also well known for it's feathered inhabitants- Black Backed Gulls and Herring gulls which are all nesting currently and quite noisy, some what aggressive and on high alert! One has to walk around with a "gull stick" for protection from dive bombing animals!

Knowing the green and sustainable record and history of the SML, I was a little skeptical. I wasn't sure how much debris or DFG we would find out there.  From far away, the coastline indeed looks pristine and somewhat treacherous because of the jagged rocks and terrain.  However, as we got down onto the rocky beach at our first potential clean-up site we discovered that in fact there was a lot of debris and trash and derelict pots, rope, foam and even Shrek. Yes Shrek- even you are considered plastic, marine debris!


It was shocking to see that even in a place that is diligent about maintaining the ecosystem as undisturbed and pristine as possible that all if this garbage and DFG could still be found on its shores.  The same was true for the other couple of sites that we investigated.  At the "best" site, where we found Shrek, we also found a plastic cooler lid, many, many bits of lobster pots, whole pots, ropes, bottles, styrofoam, a plastic bucket, candy wrappers and many of the usual suspects in the marine debris catalog.  I was excited because it would make our work here matter, but sad that even in a place that is well taken care of, this is still a problem.  It was also quite strange to be walking along (trying not to get pecked and pooped on by the giant gulls) and documenting everything we found and NOT pick it up.  I also wonder what the other 8 islands are going to look like.  I expect Star Island will be chockfull of trash treasure as there is a lot more human impact due to the presence of a hotel there, but what about the other, less visited islands. I have to say that I will not be surprised to find similar accumulations of DFG and marine debris on those either.  It will be very interesting as this project unfolds to see which Islands were better or worse off and how the type of debris that we collect and cart off will differ.

Although we spent the day focusing on trash, it was an absolutely gorgeous day on the water and on the Island and at least for me, it made me appreciate what Blue Ocean Society is trying to do even more because without their efforts who would be doing this?