When we began the Isles of Shoals Cleanup Series this summer- we had no idea what exactly it would entail.  We had a general idea of what was on the islands and pre-cleanup surveys indicated that these Islands, even though they were five miles offshore, were still sites of debris accumulation and some had  more than their fair share of derelict lobster traps.  We began with Appledore Island, the biggest of all the Isles of Shoals and home to the Shoals Marine Lab because it seemed like the one that would be most accessible and a logical place to start.  As part of the project, we wanted to visit at least a few of the islands twice, once in the beginning of the summer and once in the fall to see what would accumulate between the cleanups.  As it happens- Appledore will be our only island  that will be visited twice in the same field season due to timing, scheduling and the crazy amount of logistics that it takes to coordinate these offshore cleanups!

During our first visit to Appledore we were astounded to discover just how much debris and derelict lobster gear was on the island. At the end of that cleanup we managed to haul off the island over 500lbs of debris and gear.  Needless to say, we were all looking forward to seeing what we would be hauling off the island on this last trip. On Friday, September 7th, our crew from NH Sea Grant, Blue Ocean Society and Captain Lee Schatvet from F/V Yesterday's Storm left from Rye Harbor and steamed out to Appledore. On this trip, we would basically have the island to ourselves as the marine lab was being  prepared to shut down for the winter.  It was an entirely different experience and rather nice and peaceful, actually. Without the constant squawking and dive bombing of  nesting gulls and the general hubbub of an island full of students and staff, it really felt like we were stranded in the middle of nowhere.
Once we landed on Appledore, we picked up the Gator tractor and headed to the first sight that we cleaned up on the last trip.  Smith Cove is the largest of the sites that we went to. Unfortunately, because we couldn't get Maine Marine Patrol to accompany us on this trip, we had to leave the same lobster traps behind for yet another season.  The biggest surprise was that even after a busy summer had passed between the first cleanup and the second,  we found very little debris at this site.  And though that is great news for the Island, it was surprising.  I had expected more- even if lobster gear hadn't washed up, I was expecting the usual culprits- plastic bottles, styrofoam, bags and rope. We found representatives of each but not much at this site.

We hit Broad Cove next and initially it looked like there would very little there as well.  In fact, in the area below the high water line there was significantly less litter compared to what we found last time but since this is still a coastal cleanup we started looking a bit higher up on the beach and discovered a lot more bits and pieces of metal, traps, ropes, bottles, caps and cans. We were also able to cover more of this beach without nesting gulls nearby!

After Broad Cove we went to a new site- one we hadn't been able to access back in June because of the gulls. This was Devil's Glen. The climb to the site was lovely with many butterflies and pretty flowers but once we got to the site it was a little treacherous getting down.  Fortunately- there was very little there as well except a few plastic bottles and some abandoned buoys.

Because of the nesting gulls back in June, there was a site that we didn't effectively cleanup and that was Sandpiper Beach.  This time, as we were melting under the very hot sun, we were able to spend a good chunk of time here.  Again, however, we were surprised to find very little.

Our final site for the day was the beach right by the tidal swimming hole and near the High Water Dock. By this point, we were overly thirsty and over-heated but we felt we couldn't just stop.  So we pushed on- although moving a bit slower.  And wouldn't you know? I believe we got most of our litter from this beach and the surrounding rocks.  There was so much rope and bits of plastic and bottles and styrofoam and other very random things.  We also found 13 disks from the Hooksett wastewater treatment plant spill on 3/6/11.


Was this a successful cleanup? I would say absolutely yes! Our final weight  (76 lbs)may have been small- nothing compared to some of the hauls we have had this summer- but we are at least leaving Appledore at what we feel is a good baseline of  "clean", from which we can better measure accumulation rates in the future.  Now this isn't an exact science- we have to take into account weather, surf and other environmental factors that will likely impact any of our results and maybe after a few storms over the winter the type and amount of debris that will wash up will be significant.  But at least we know what the island looked like when we left...pretty darn clean!

We would like to thank the Shoals Marine Lab for once again allowing us access to the island and to the gator and once again to Capt. Lee Schatvet and Yesterday's Storm,NH Port Authority and NOAA for their help!


P.S. A quick update on the last Appledore cleanup. Back in June we had the assistance from Maine Marine Patrol Officer Dave Testaverde- this time around he was unavailable, so we couldn't touch any traps or even move them to a a more accessible pile. So we noted their existence and moved on.  However as we were leaving, I noticed that the two "intact" lobster traps that Officer Testaverde had left for the owners (after contacting them) were still exactly as they had been left.  Makes you wonder why we have a law that goes to such lengths to protect gear. I continue to be frustrated by this law. 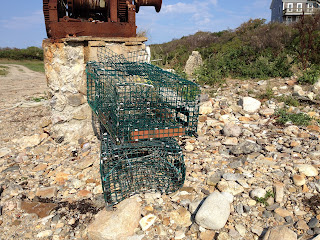