We just pulled off the first EVER underwater lost fishing gear retrieval in NH waters!

For the last several years, we have gone out to the Isles of Shoals and conducted coastal cleanups of the islands.  Often, we came back with many unfishable lobster traps that had gotten lost and then washed up on shore.  We have also conducted a few side-scan sonar expeditions in Gosport Harbor on Rozalia Project's sailboat, American Promise.  We have seen the bottom of the Gosport Harbor littered with lost traps and other debris and always hoped (and even applied for funding) that one day we would be able to not only detect the gear, but also RETRIEVE the gear.  Well, we got our wish!

Last week, in collaboration with World Animal Protection (WAP), NH Fish and Game and lobsterman Lee Schatvet (F/V Yesterday's Storm),  we (BOS and NH Sea Grant/Cooperative Extension) were finally able to go out and detect and mark lost/inactive lobster traps with Humminbird side-scan sonars that were loaned by Virginia Institute of Marine Science. Then, we were able to go back and retrieve some of the gear that we found.  This was a two-day project made possible by funding support from WAP and our partnerships with NH Fish and Game and Capt. Schatvet.

Our first day , Wednesday, August 27th, Jen Kennedy (BOS), Elizabeth Hogan(WAP), Kara Wooten (WAP) and myself (NHSG) boarded the Yesterday's Storm and headed out towards the Isles of Shoals with our eyes glued to the screen of the Humminbird, which Lee had mounted on the side of his boat.
Now, the Humminbird is a great piece of equipment and relatively easy to use, however, the big challenge was being able to see the screen in bright sunlight as well as figuring out if what you were seeing on the screen was really a lobster trap or just rocks.  Additionally, once we were sure that what we were looking at was, in fact, a trap, was determining whether it was, in fact, a lost/inactive trap!  This required confirmation of the presence or absence of a lobster buoy before we were able to mark the spot as a potential waypoint for the next day.  The Hummingbird worked very well in shallower water, but  the deeper we scanned, the smaller the traps appeared and sometimes we couldn't detect anything at all. 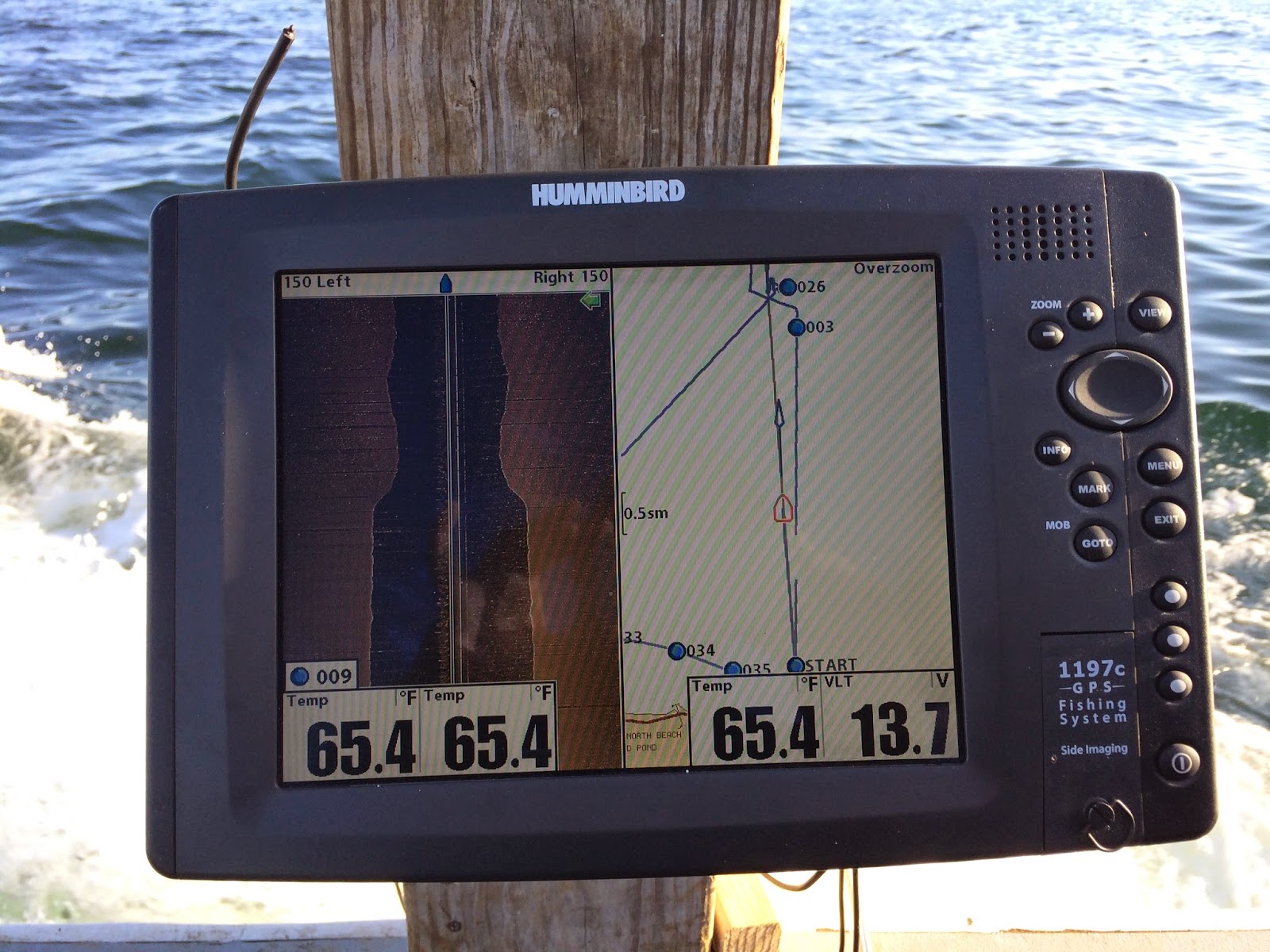 We spent most of Wednesday doing transects, looking for traps both in Gosport Harbor and later at the mouth of the Piscataqua River.  In all, we were able to mark 34 potential lost traps for us to go back and try and retrieve the next day.

The next day, Thursday, August 28th we met at Rye Harbor at 7 AM and NH Fish and Game Conservation Officer, Dale Gargac was waiting for us.  In order to be able to do this kind of project in NH waters we need to have a CO present to ensure that what we are hauling up is not an active lobster trap and that the traps we do haul up that are inactive need to be examined and deemed fishable or unfishable.  Touching a lobster trap without the expressed permission of the owner OR without a CO present is illegal under NH law, so it CO Gargac's participation and presence was important and required.

We arrived at one of marked waypoints around 8:30 AM and we quickly got to work.  Capt. Lee had soldered together a heavy duty grapple which is what we needed to lower and drag in order to hook lost gear.

While Lee lowered the grapple, the rest of us got ready with data sheets and kept an eye on the sonar. However, even though we may have marked locations of potential traps, getting back to that exact spot proved difficult because of the tide and wind.  On the third grapple drag,  we hooked something in the general proximity of several marked traps and we all cheered and hoped that we had hooked a "ghost" trap.  Well, we hooked a ghost trap for sure, along with 7 others- in fact we had hooked onto a lost 8-trap trawl.  This was amazing but we were not expecting to deal with so many traps all at once.  Lee used his winch to haul up trap after trap and we had to jump into action, collecting data, photographing the traps and seeing and counting what animals were inside and outside of the traps.  We had to move quickly in order to return the animals back to the water before they expired.  It was exciting and at times chaotic!  We also had to process the traps and move them out of the way to make room for others.


While we processed those first 8 traps, Lee kept on grappling in the same area and suddenly, we were hooked on something else.  Yep, he started hauling up a 10 trap trawl, also lost. More data collection, more pictures, lots of "look at all these amazing critters we never get to see" exclamations and lots and lots of Jonah and rock crabs, brittle stars, blood stars, lobsters, fish, worms and spider crabs that used seaweed as camouflage.

All told, we found 24 lost, inactive traps, most of which were still in really great condition and could be used again and over 400 pounds of inactive rope and line.  We were able to release about 127 animals (lobsters, crabs and fish), 51 of them were lobsters, some with eggs, back to the ocean.  While at sea, CO Gargac called the owner of the traps and we were able to return 19 traps to him when we returned to Rye Harbor.  The rest of the traps were deemed unfishable and we disposed of them in a dumpster at Rye Harbor along with the 400 pounds of rope and line.  The traps and ropes were then taken to a waste to energy facility where it would be turned into electricity.


Our goal for this expedition was to find and retrieve lost gear in NH waters to prevent 'ghost fishing' and to make the ocean a bit safer for marine life and for other ocean users.  In NH, approximately 10% of a lobsterman's traps are lost every year as a result of weather or other boaters cutting the lines accidentally. These traps are expensive and the economic impacts are significant in loss of gear and loss of potential catch.  The traps continue to work, they continue to fish even if they are not being actively hauled by their owners.  Additionally, lost gear can accumulate into larger, entangled 'balls' and become safety hazards for both commercial and recreational boaters.  Being able to successfully remove lost gear, return animals to a cleaner habitat, remove potential hazards and return useable equipment to its owner was incredibly rewarding. Working collaboratively with WAP, NH Sea Grant, NH Fish And Game and Capt. Lee was a clear example of the amazing things we can accomplish together and properly and within the confines of the law.  All of the logistical pieces worked as they were intended and we were able to do some good in many aspects of this complicated issue.

Posted by Gabriela Bradt at 5:47 AM