This past Monday, July 9, 2012, I was invited to go on a whale watch on the Atlantic Queen out of Rye Harbor and also to see (and participate) how Blue Ocean Society is collecting their Pelagic Marine Debris data.  It was a gorgeous day and yes, it was a "for fun" trip but also a "for work" trip (don't hate me because I have a cool job:)).  We were heading out to Jeffrey's ledge which is the normal route for the AQ and there is usually success in finding whales and Monday proved to be no different.  It takes about an hour and a half to get to Jeffrey's and so I took this opportunity to go to the back of the boat and bug the interns in charge of collecting the pelagic debris data.  I wanted to know how they were recording the data and other information.  I was also asking them to fill me in on their experiences this summer regarding what they were seeing off the boats, and the quantities and what strange things they encountered while recording the debris data.

There were two designated interns that are on the look out for debris and they were stationed on the second deck of AQ and in the back.  They were equipped with a data sheet where they were to log GPS coordinates of every piece of debris they saw, the type of debris(bags,bottles, food wrappers), what it was made of (plastic, foil, paper), condition (new or worn) and weather there was anything growing on it. They also record the sea conditions, air temperature, swell height, wind speed, visibility, the time for high tide, cloud cover and wind direction. From the moment we left the harbor until we came back we began looking for debris in the water.
As we were steaming out to Jeffrey's I was asking the interns if they saw a lot of debris every day and they pretty much said that it varies, some days there is a lot and some days not so much.  One of the interns said that even in the short time she has been doing this this summer she has seen some really weird things but the weirdest thing she has seen to date was a big piece of plastic that was most likely the molded packaging for something. They also said that balloons floating on the water are pretty common items.  An hour into the trip and I was beginning to think that it would be a low litter kind of day and then- there it was- almost exactly 1 hour and approximately 25 miles out at sea- we saw our first plastic bag.

Here is what is so sad about this for me, aside from the fact that there is a plastic bag floating in the ocean in an area where whales and other marine creatures are feeding,  the fact that we even have to be on the lookout for this stuff.  Instead of concentrating on what other cool creatures are out and about 25 miles offshore, we are constantly combing the water for trash.  After we saw that first bag the hits kept on coming. In fact for the next ten minutes we recorded 9 more pieces of litter- so every minute brought another data point.  Within half an hour we had collected the bulk of the data with 6 plastic bags, 3 plastic bottles, styrofoam, foil wrapper and the winner- a plastic bucket. 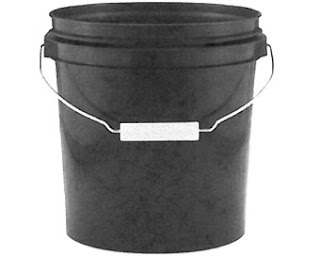 About an hour went by as we slowly followed the whales and we were still on the lookout for debris and except for the plastic bottle pictured above we didn't see anything else.  As we began to head back to Rye Harbor, we ended up recording 7 more pieces of debris by the time we reached the harbor, including more plastic bottles, bits of plastic and paper, a paper bag and the plastic lid to a container.

All in all it was a gorgeous day but I couldn't help feeling a bit deflated. It reminded me that our environment is changing. Will my children grow up looking for garbage instead of shells on the beach (my 3 year old already is) and for floating plastic pieces instead of dolphins and whales and sharks? That is why I hope the work we are doing and data we are collecting will be used to raise awareness and educate people to keep that from becoming our reality.