Is this what you want all of our beaches to look like?

On Monday June 18, my husband, myself and two young boys woke up excited to meet up with my sisters and their families for our annual "at the beach" vacation on the North Coast of Honduras.  Usually we go to Tela, Honduras but this year we decided to try something different and instead head a bit more west to the town of Omoa, Honduras.

Now, as a Honduran, I am aware of the horrible poverty and corruption that rules this country and that the lack of funding for ecological and environmental health is really non-existent so I was under no delusions that what we would encounter would be pristine by any stretch of the imagination, but what we actually found was beyond my wildest imagination.

As we were driving from our hotel in San Pedro Sula,  I was getting a review of the house that we had rented and so far so good. A good sized, clean, swimming pool that would be perfect for the kids and enough room for all 12 of us to fit comfortably. The drawbacks were an infestation of ants and only one room had air conditioning- which was not what we had been led to believe- but really- who cares?  Then my sister got a text from her husband. He and the kids had ventured out to the beach which had been portrayed in the brochure as nice and clean and essentially private.  His text said this "Tenemos un desastre ecologico!" "We have an ecological disaster".  I thought he was kidding. My sister did not show me the picture he had attached. Let me say again...I thought he was kidding. At the very least I thought he was making fun of what my reaction would be knowing that I work on marine debris and that I would be aghast with the condition of the beach which in my past experience has been somewhat dirty. Unacceptable by my standards and most Americans but then you get over it and enjoy it nonetheless.

We finally got to the house and it is typical humid, hot, tropical weather and I loved it! We unpacked but  we decided it would be better to hit the pool which was right there than to hit the beach that day.  We'll save that for tomorrow.  I asked my brothers in law about the condition of the beach.  Was it really that bad? Were you just exaggerating?  Their answer was a resounding no and that in fact it was so bad that there was no way we could or should go swimming in the water.  If the beach was that bad- the water had to be worse. Sigh... so much for the beach vacation.  I resigned myself to the inevitable discovery of a trashy beach.  The next day, I decided to brave it and went down to the beach with my sister and some of the kids just to see how bad it really was.  I really thought I was prepared for what I would find. In fact, although I was disappointed, I also was not surprised that this would happen here- well because they have other more pressing priorities- like 60% unemployment and hunger.

When I reached the beach, at first I couldn't wrap my head around what my eyes were seeing and the when I did- my eyes filled up with tears and there was a pit in my stomach- because even if I wanted to spend my vacation picking up a beach- there was no way I could do it because this is what I found... 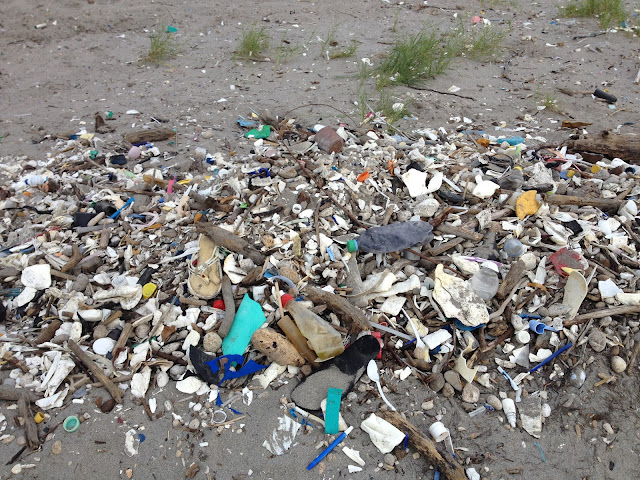 It went the entire length of the beach. A bit more exploration and I discovered that even beyond the massive piles of garbage, in the areas that were less trashed, if you looked at the sand, initially, you would think that there were a lot of shell fragments, but upon closer inspection you realized that it was just more bits of plastic mixed in with the sand.  in fact, this was the strategy that they used to " clean up" the trash several days later. Instead of bringing in machinery to scoop it up an haul it away which was the only way to deal with this amount of trash, they instead brought in a dump truck of sand and dumped it on the piles of garbage and then essentially rototilled it until it was a nice mix of plastic bits and sand.

To be fair- this beach- is dirty like many other beaches in Honduras. That is a fact.  However, it is normally not this bad.  The owners of the house blamed it on the rains. They blamed everything on the rains and sort of shrugged unapologetically when we complained. But something still didn't seem right. How could there be so much debris on this one beach and it wasn't even that big of a beach? Semana Santa -Holy week- in April is THE party holiday in Honduras.  My sisters said that in general the ocean is the peoples garbage can and that especially that time of year- everything goes into it- but it was hard to believe that two months after the holiday that all of this garbage would show up.  As it turns out, while some of the garbage could definitely be traced back to Semana Santa festivities, the rest seems to have originated from Utila, one of the Bay Islands off of the North Coast.  According to my brother in law- there was some sort of "Jam" music festival a short while before and the ship that was carrying all of the garbage from Utila had its motor break.  Now I have no idea why on earth they couldn't fix it or why it couldn't have been pushed back to land or whatever- as I have no idea of the size of the ship- but in any case orders came from the owners of the ship to dump all of the trash in to the water. So they did.  I have searched for corroboration of this story online but can find nothing, although that is not surprising either, so I am putting this out there with the warning that this is speculation only.  But whatever the reason for why the beach was in this condition- it is heartbreaking and really unacceptable regardless.  What is worse for me though is the apathy and the so what attitude the locals have. Just add this to the rest of the other stuff in their lives that they can't do anything about.  Sadly, even if they could, I am not sure they would do anything more than dump more sand on top of it.

Honduras could be so beautiful if the people in charge would let it. Not sure if that is in the cards for them.

In short- here in New Hampshire we CAN do something about it. learn from this and use it as a motivator to keep our oceans clean and healthy and garbage and plastic free. Don't let our beaches turn into seaside garbage dumps. Care.
Posted by Gabriela Bradt at 10:52 AM