White is the color of the clean, the unblemished, the pure and the untouched.  It is also the name of one of New Hampshire’s Isles of Shoals and sadly, this island and it's immediate neighbor, Seavey are far from untouched- far from pure.  It is the home of tern colonies and a few interns that spend their summers monitoring the terns, the eggs and the hatchlings every year.  It is a beautiful piece of rock in the Gulf of Maine- much like the other 8 islands.  About 100 yards next to it is Seavey Island which is smaller and even more of a barren rock than White.  On Seavey you see the blinds-little 4x4 foot boxes on stilts the interns use to monitor the terns without disturbing them.   It was these two islands that we visited in order to continue our summer of picking up marine debris and derelict fishing gear off the Isles of Shoals.

Getting to White Island was in itself a coordination feat and thanks to Dan Hayward- the man behind the tern conservation project-and his interns Tyler and Lara and to Yesterday’s Storm captain Lee Schatvet- it was possible to this first scouting trip that turned into a mini- clean-up.  The idea, originally, was to go to White for a quick look-see and to get a count of the number of derelict lobster traps that we knew were there and to assess what other marine debris and other trash was out there.   However, with logistics being what they were- we decided that if we could pick it up- we would.
We left Rye Harbor at 8:30 in the morning on Friday August 3 and Lee got us to White around 9:15 AM.  We knew that we would have to get a ride from the mooring to the island but I wasn’t really expecting a zodiac that had to be rowed out to us by one of the interns (thanks, Tyler!) and I definitely felt badly for the poor guy who had to lug us out there and back.  Once we got there, the other tern intern, Lara, met us at the ramp and immediately took us over to Seavey because the tide was coming in and we had about a thirty-minute window of opportunity to assess the island and get off before we got stranded.  We crossed the rocky passageway and scrambled over the rocks- all the while making sure we didn’t step on any eggs or tern chicks.  Within a minute or so of stepping onto Seavey- I found a balloon and a string. A few steps further and I picked up my first plastic bottle.  A few minutes later as we made our way a bit higher on the rock we began to see the lobster traps and the buoys and the ropes and the plastic bottles. 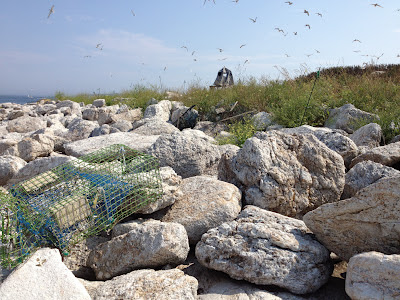 The quick survey of Seavey told us that our next clean-up would be concentrated mainly on Seavey since in 25 minutes we managed to count over 25 derelict traps and just as many buoys.  We collected at least 5 plastic bottles, ropes and just odds and ends made of plastic.  While we hurriedly assessed the debris situation, we had to walk carefully and nimbly around the tern colony.  Along with the trash we encountered baby terns and eggs.

It was sad- actually.  These two islands are sanctuaries for terns and while there are conservation efforts going on for the terns- it seems very little conservation is being done for the islands.  Piles of lobster traps sit on both islands- on White- the pile of traps is GIANT- with approximately 30 traps mixed in with buoys, wood, rubber parts, bottles, cans, cables and ropes.  We have our work cut out for us in the upcoming follow-up clean-up.  Coordinating with local fishermen, volunteers, whale watch boats,tern hatching schedules and NH fish & game is quite a juggling act but totally worth it if at the end of the day these traps and other debris can be removed from the islands.  The terns deserve a cleaner sanctuary and these beautiful, rocky islands should be kept debris free.  They should sparkle. 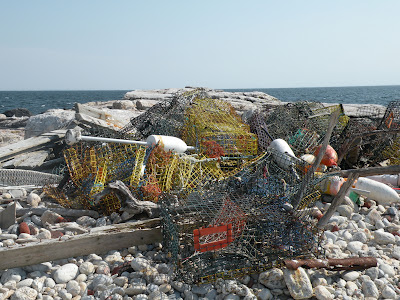 Thanks to the Fishing for Energy Partnership and NOAA for providing funding for our cleanups at the Isles of Shoals this summer!

Posted by Gabriela Bradt at 8:03 PM