Our summer of cleaning up as many islands of the Isles of Shoals continues.  On Sunday, August 12th, Jen Kennedy (BOS's executive director) and I went out to Star Island to give an orientation talk to a conference that would be working with us on the clean-up the following afternoon.  Perhaps it was the beauty of the day and the island itself but we had a smaller audience than we had anticipated but Jen gave an excellent talk and it got those that did attend thinking and spreading the word. We went to a brief social hour with the conference attendees and the power of networking- well at least talking to others- really paid off!  While we were trying to garner support and enthusiasm for the clean-up the following day, we started talking to a boat builder who seemed interested in what we were there to do.  He then introduced us to his wife who was an engineering professor at MIT and found out that they were in charge of leading 12 4-6 graders on a visit to neighboring Smuttynose Island the next morning. When they heard that we were trying to survey and clean-up as many of the islands as we could they asked if we would lead the kids the next morning on a survey of marine debris on Smuttynose. We were very excited by the prospect because we could teach the kids and we could get information that we could use when planning our clean-up of Smuttynose in late September! After we got all of that figured out we went to dinner which was family style and pretty good!

After dinner, with the weather still being perfect we set off around the island to see how we would coordinate the volunteers to collect the most debris off as much of the Star Island coastline. 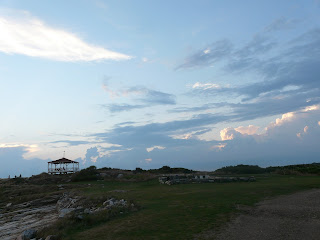 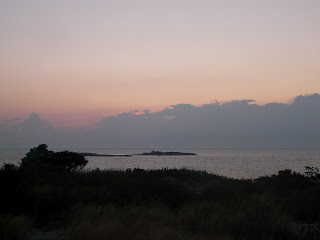 As nightfall was approaching we made note of all the places we thought would be good and safe for the volunteers to go clean.  However, the more we walked around the back side of the island, where most of the derelict traps were, we realized that it might not work to have the volunteers recover the traps since it would require hauling them over pretty steep rocks and in some case through poison ivy to get them to the dock where we would load the boat the following day.  I was growing more concerned as we walked along the rocky coastline because there were a couple of logistical problems that I was anticipating, 1) We would not have the volunteer numbers 2) the volunteers that we may have might not be 'strapping young' ones that could navigate both large pots and rocky terrain and 3) if we lucked out with the volunteers could we even get to all of the traps in the allotted time frame which went from 2 hours to 45 minutes. The only way to really ensure that we got all of the traps off the island would be to do all of it ourselves. So that is what we did!


After we did our quick trip to Smuttynose with the kids- we went back to Star for lunch and after lunch,  armed with some bolt cutters (to get pieces that were trapped in the rocks) and permission to move unfishable traps by the NH Fish and Game Conservation Officer,  we went to work.  The day was hot and the sun was blazing and we began pulling, cutting and hauling traps from under rocks and in between rocks and in bushes so that the volunteers would be able to just collect them and bring them to the dock. Well at least that was our initial vision!


The coastal clean-up was scheduled to start at 3:45 pm.  We worked on getting all of the traps that we were given permission to move until 3:15 PM. At that point- exhausted, Jen went to deal with making sure we had a dumpster on the mainland.  I realized that there was no way we would be able to move any of the debris in the time allowed and went into 'deal with it- fast- mode".  Somehow, I managed to rope in three of the strapping, young maintenance staff (read...tan, toned, tall-20 somethings female and males) to commandeer a truck and between the 4 of us we managed to move all of the traps from the rocky cliffs to the truck AND unload them onto the dock to await the ride back to Rye.  I want to stress the impressive efficacy of this trio- they literally did the work in 15 minutes! It was incredible and quite honestly, if we were to give awards they would get the "hauling- a**" of the year award! Without them we would have been up a creek with no paddles!  This also meant that we were able to then oversee a much more laid-back- beach clean-up with a smaller group of volunteers for the 45 minutes that they gave us. Had it not been for Jen and myself and the three staff, I have a feeling this clean-up would have been a bit of a wash.  There were at least 15 traps that we removed and all were massively crushed or tangled.  We estimated that the traps alone were about 600 pounds and the rest of the trash was about 75 lbs.
At 5:30 PM, Lee Schatvet and the Yesterday's Storm pulled up to the dock and the three of us began tossing the pile of trash and traps into the boat! That was fun but also hard work and a big thanks goes to Lee because with out his extra muscles it would have been a really long day!

It was a really long 1.5 days especially in the heat and then dealing with logistics on land and logistics regarding volunteers and equipment.  In the end though, we pulled out a really great, fun and successful clean-up.  We removed approx 675 lbs of debris off of Star Island, got to experience an overnight at the hotel and even got a jump on the Smuttynose Survey! It was also a great experience working with Star Island and the conference and we learned a few things that will help streamline the process for next year.  We definitely enjoyed our trip back on the Yesterday's Storm.